A classic task from interviews at Google

You see the numbers on the table, and you should answer the following question: what number goes after?

Quite often, everyone is trying to find any regularity in a numbers’ series that seems completely meaningless and results in a particular failure. Here, you need to forget about the math principles. When you pronounce these numbers, it turns out that they are arranged in increasing order of their letters’ number. 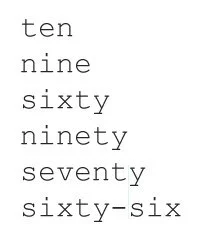 Afterwards, let’s look more closely at this series. 10 is not the only number of three letters. At this point there could be 1, 2 and 6 (one, two and six). The same can be said about 9, the numbers 0, 4 and 5 (zero, four and five) also have the same number of letters. So, we can conclude that the list includes the largest numbers of those that can be expressed in words with a given number of letters.

So what’s the right solution? Obviously, the number after 66 should be of nine letters (not counting the possible hyphen), and it should be the largest of its kind. Thinking a bit, you can say the answer will be 96 (ninety-six). You should understand that numbers greater than 100 are not suitable here since one hundred has 10 letters.

You may wonder why there is not hundred, million, or billion instead of 70 in the provided list, as they also have seven letters. Most likely, the reason is that English-speaking people do not say “hundred”, but “one hundred,” the same applies to the other two cases.

Thus, you can make a conclusion that option is the correct one. At Google, it is considered acceptable, but not perfect. There are more numbers:

It is written as one googol (nine letters).

However, this is still not the best option. The perfect answer is ten googols.