Why is it worth to pay attention to Reddit

Promotion on social networks has long been an integral part of any SEO specialist activity. Indeed, it would be short-sighted to ignore the wide opportunities that social networks may provide you with.

Recently, promotion in the social network Facebook is losing its relevance and effectiveness. However, when one door closes, another one opens. It is the topic of our discussion today. In case you have not dealt with the Reddit platform yet, now is the time.

Reddit is a mixture of a social network and a news site. Users registered on the platform can post any information there. The most interesting content that has collected the most likes (voting system) is displayed in the search results above.

Today, Reddit is one of the most popular websites around the web. According to traffic, it takes 6th place in the world (according to Alexa Internet).

One of Reddit’s core values ​​is the Ask Me Anything section. In this section, world-famous people answer user questions. For example, former US President Barack Obama talked to users on Reddit, Microsoft founder Bill Gates and many other celebrities answered questions.

More and more SEO companies are using this platform to create not only traffic but also real link building. This is one of the most effective methods of website promotion.

Although Reddit focuses primarily on US users (54% of visitors are Americans), in other countries the service is also gaining popularity.

There is a common misconception that promotion on Reddit is too complicated and the website is completely unsuitable for companies, etc. However, this point is wrong. If the service initially seems more complicated, do not give up on it. In fact, everything will become much simpler in a while.

In case you fail in winning the attention of Reddit users, then you are acting incorrectly. Companies, celebrities, and ordinary people who have become popular among Reddit users apply the right principles when promoting, well-known on social networks.

Think of Reddit as a place to interact with users’ needs and interests. Do not send self-centred messages aimed at advertising yourself personally. In this case, there will be no effect. You should keep in mind that the pages on Facebook will gradually lose relevance, but Reddit will continue to grow and develop.

An important advantage of Reddit is the constant introduction of new features that make the service even more useful. For example, in recent months, the company introduced the following innovations:

If you still doubt whether it is worth using Reddit for promotion, then you should take a look at the following statistics:

Let’s conclude that there is no sense to ignore and skip the Reddit social network for promotion.

For a long time, Facebook was the main social network for marketers and search promotion specialists. In 2017, about 94% of marketers worked on Facebook. Of course, there were reasons for that. The social network was very convenient for promotion goals.

However, the situation is changing dramatically now.

So, company management has already announced that it will make groups less visible in the user feed. It means that content from groups will be shown less often, and users will need to directly go to their pages of interest. We perfectly understand the results of those algorithm changes. Advertising on Facebook and developing your own groups will become less effective.

The head of Facebook, Mark Zuckerberg, repeatedly emphasized that the social network is primarily designed to maintain communication between friends, family members, etc. The company has already made huge profits from the new projects’ development. For this reason, the marketing component can be gradually reduced to implement the Zuckerberg concept. The decrease in the significance and the number of content impressions from groups only confirms that the head of the company took this position.

Well, as long as Facebook returns to its original concept, Reddit aims to play ahead of the curve. The company updates the outlook of the social network, changes the interface, adds new features. This way, there is no doubt that the leadership of Reddit will continue for a long time. No, I’m not saying that you need to leave Facebook right now. If you have problems with the promotion using the largest social network in the world, I just recommend you to read this article and start using Reddit as an alternative option.

The Reddit administration plans to occupy the niche left Facebook. In this social network, companies can interact with the audience by presenting their products and services.

Following recent Reddit innovations, companies can create their own pages on the website. Previously, they could only leave messages and create topics on thematic boards.

Having created an own page (profile), the user publishes information on their own site. Other users can subscribe to updates and track the new content published.

This innovation provides great opportunities for companies. Now they can create their own branded accounts, increase the subscriber base and more effectively achieve their goals. Audi Sport, WWE and Nintendo have already created their own branded profiles on the platform.

More recently, Pinterest was called the most promising social network (for marketers). Indeed, the service was developing very quickly, and the advertising in it was more and more effective.

The same thing was said about the Twitter service. Gradually, interest has gone. Now only a few are actively using the website to advertise goods and services.

Of course, Facebook remains a real hegemon, but here the situation is changing. After changing the algorithm and reducing the display of content from communities/pages, the rules of the promotion will become completely different.

However, we can see a very promising situation on Reddit. ROI (return on investment) is quite high. The service audience is constantly growing. In 2011, it amounted to 13 million active users, in 2016 – 231 million. The numbers are impressive, are not they?

Experts note that Reddit’s audience includes primarily wealthy users. So, the income of an average American family is $59,000 per year. It means that the amount of an average social network user will be almost $68,000. What does this mean? Reddit’s target audience is more solvent.

It is worth noting the fact that 78% of Reddit users received higher education. This is a pretty high rate. Nearly 2/3 of Reddit’s audience is looking for any information and news on the website. It turns out that Reddit is becoming the main source of news for this group.

In fact, there are many other reasons to start using this platform for promotion goals, but we want to specify the key 5 points. Each of them is valuable enough to begin your promotion campaign on Reddit.

Previously, the Reddit social network had a rule that obligated users to leave no more than 10% of posts dedicated to promoting their own goods and services. For example, the rule applied to post links. It means that 90% of the user’s posts should have been about any subject, except for self-promotion.

Last year, Reddit CEO Steve Hoffman said this rule would be changed. Now the company management has other requirements. So, users are expected to receive quality content. It doesn’t matter whether you publish some kind of advertisement or any other content, we recommend doing it in a quality manner. Make a beautiful design, attach links, pictures, infographics. In this case, no one bothers you to leave at least 50 posts per day. Obviously, this reform is aimed specifically at attracting companies.

Recently, posting on Reddit was a long and painful process. Moderators studied carefully each post and only then it was published. Moderation affected approximately 70% of all posts. Further, at the request of the moderator, the post’s author had to correct it and rebid for publication. All this often turned into a nightmare, and many users refused to fight against these system rules.

Now everything is completely different. About 90% of the content is published without moderation. Moderators are involved only in case they delete some post. The Reddit manual seems to show that it trusts its users until they break any rules. If you do this, then you will have to get in touch with moderators.

Companies can actively develop and grow their engagement on Reddit. The main thing for the website administration is that the interaction between users and companies is meaningful and useful. This will help quality content.

Reddit is not opposed to the marketing efforts of companies. The leadership of the social network perfectly understands that companies need to make money. Therefore, it all depends on you, nobody will poke sticks into spokes. 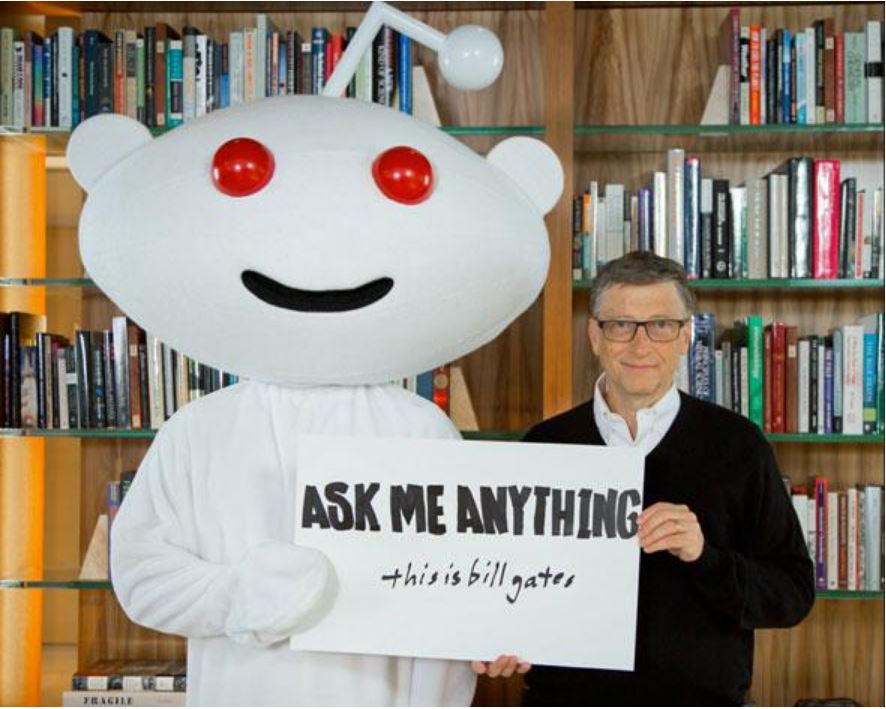 Microsoft founder Bill Gates under Ask me Anything

Not so long ago, Reddit introduced a full-fledged chat between users. Now you can directly interact with the target audience. This is a great marketing opportunity.

The leadership of social network perfectly understands the importance of such innovations. They are really trying to create a comfortable environment for companies.

The ability to create profiles on Reddit opens up new perspectives. For ordinary users, little has changed. They continue to monitor what they are interested in, subscribe to certain topics, unsubscribe if they have ceased to interest them. Everything is the same.

However, many things have changed for companies. Now you can directly publish information on your page. There is no longer any dependence on the actions of the moderators, you do not have to wait until they allow the material to be published in a certain branch.

This innovation allows users to track updates on company profiles. it is really convenient for both parties.

While Facebook is losing ground, abandoning its traditional strategy for interacting with companies, Reddit is building up a defense. For a long time, SEO specialists thought this social network was too complicated for work, but right now everything is changing. Through Reddit, you can attract thousands of visitors with a high conversion rate to your website. We believe this opportunity is worth spending much time on creating, improving, and promoting your Reddit account.

The key to success in this social network is the transformation of the SEO-specialist into one of the active community members. You need to become a real Reddit user to successfully promote your own goods and services there. In case you succeed in it, the result will be perfect.

Reddit is a promising and interesting platform. Hard work on it can bring good results. So far, the platform is still available for newcomers, there is still virtually no high competition. For this reason, it is a perfect time right now to start your marketing campaign and promote your product or service on this platform. Be creative in the process; don’t try to aggressively ad your products or services to your users. Instead, try to provide them with useful information and become a virtual friend to achieve good results.